Yantras supplement the power of mantras and are as strong as the mantras themselves. If a mantra is the invisible driving force, the yantra is the visible means to gain power and wealth, ward off evil and illnesses, nullify the ill-effects of planets, bring you luck in love & life, enhance your capabilities – and bless you with almost any material comfort or spiritual benefit you desire.

Indian astrology is a great discipline. It has described many miraculous measures for planetary peace and to get the desired results. These miraculous remedies not only have mantras, but also use of Yantra. These instruments have immediate effect.
What are instruments? (What Is Yantra): When a mantra or tantra is represented on a clean paper, bhojpatra or any other sacred surface by drawing mathematical figures or figures, it is called Yantra. It is believed that the Yantras have divine supernatural powers with mantras. By their legal use, any human being can acquire worldly powers according to his will.
Types of Yantra: There are many types of Yantras such as Shri Yantra, Gopal child Yantr for obtaining children, Kubera and Dhanalakshmi Yantra for getting wealth, Shri Yantra etc. Many of these Yantra are Vedic and some are Tantric. Among the instruments, the most important is the numerals and mantras written in it. Based on these scores, these instruments are useful. 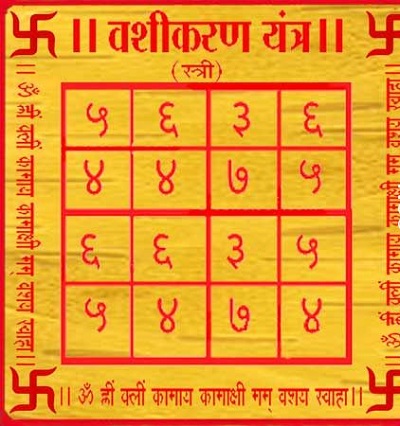 Yantra is an instrument, apparatus, a talisman or a mystical diagram. It is a technique or path, considered the simplest and shortest, thru’ which one can attain one’s desires, and fulfill one’s wishes. It is said that the ‘Devas’ or Deities reside in the Yantras and by performing ‘Puja’ or worship of Yantras, one can appease the Deities, remove the malefic effects of planets, and increase the flow of positive influences. Vashikaran mantra and Yantra

The writing, painting, engraving or whatever other form of transference which is employed must be done according to a specified set of rules. For instance,
certain yantras can only be made on certain days, at a certain time. Similarly, there is a distinct link between the kind of yantra and the kind of metal chosen. For example, a yantra to appease the ill-effects of the planet Saturn is generally engraved on iron – the metal associated with Saturn. The yantras written, drawn or painted on paper, bhojpatra or leaves, must use the inks specified by ancient
texts, such as those made from red sandalwood, or saffron or white sandalwood, etc. The type of pen, its length, width, etc, used for preparing a yantra varies
according to the purpose and type of yantra. Whether on paper or any other material, the size of the yantra is also pre-specified, as is the duration for which
its efficacy will last. Then again, the yantras must be installed in a certain manner, on a certain day, at a certain time, facing a certain direction and must be
sanctified by a specific mantra begun on a certain day and time, recited for a specific number of times. There are various other rules also. A particular
yantra must be washed in the specified manner, for example, in milk and water. Unless a yantra is worn or installed according to the rules, its efficacy is
greatly reduced and the effects virtually diminish.

Some of the earliest yantras are associated with auspicious symbols and powerful numbers. In ancient India, for instance, the good luck square of nine which always added upto fifteen was deemed a harbinger of prosperity and happiness and even today some business establishments and even homes paint this square near their main entrance.